The accumulation of fibrillar protein aggregates is the defining feature of neurodegenerative diseases such as AD, ALS, FTD, Parkinson's, etc; for example, the aggregation of ordered tangles formed by the protein tau has been found to correlate with the progression of AD. In all cases, these ordered aggregates present attractive drug targets where inhibiting or reversing their aggregation will contribute to preventing, slowing, or reversing disease progression. An atomic-level understanding of these pathogenic fibrils has only recently been made available for drug discovery efforts. Nevertheless, the lack of ordinary druggable sites on this structure presents a considerable challenge for conventional drug discovery approaches. ADRx utilizes a structurally-enabled platform to identify unconventional druggable sites on these targets and leverages peptide-based protein interface libraries, aided with computational design to exploit the shape complementarity inherent in these structural interactions for the development of novel drugs. Peptide microarrays allow for the rapid screening and discovery of peptides targeting those sites specifically to allow for downstream drug development.

Dr. Leibly is a biochemist and structural biologist whose work at ADRx focuses on the discovery of novel inhibitors of protein aggregation. This protein aggregation is most commonly associated with neurodegenerative diseases such as Alzheimer’s and ALS. His current work seeks to design and select highly specific peptides to be used as tools to facilitate small molecule discovery. Dr. Leibly earned his Ph.D. in the Todd Yeates’ laboratory at UCLA, where he designed and determined the structure of oligomeric forms of GFP as a crystallography tool. He has 15 years of drug discovery experience, including structure-guided protein kinase projects, novel antibody discovery, and peptidic amyloid inhibitors. 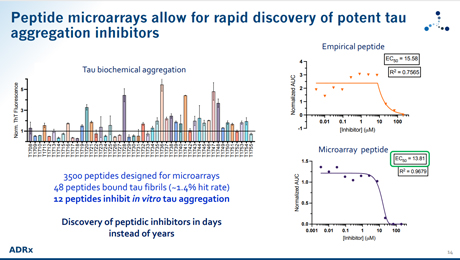