In this webinar, we present a straightforward approach for the unambiguous validation of antibodies by combining protein and peptide microarrays: An initial screening of antibodies against HuProt™ Human Proteome Microarrays with more than 20,000 human proteins enabled the determination of the target specificity and off-target binding on the protein level. For further validation of the antibody responses, we applied a multiplexed high resolution epitope mapping of the top cross-reactions and the target protein by PEPperCHIP® Peptide Microarrays. This resulted not only in the identification of the actual epitopes of the antibodies, but also provided more insight on the observed cross-reactions.

Dr. Volker Stadler is the CEO and cofounder of PEPperPRINT. He graduated in chemistry at Heidelberg University and received his PhD in physical chemistry. At the German Cancer Research Center in Heidelberg, Dr. Stadler contributed to the development PEPperPRINT’s new peptide microarray technology which was published in Science and Angewandte Chemie. From 2009 on, he was responsible for the translation of the peptide microarray technology into a commercial product and service business and launched PEPperPRINT in 2010. PEPperPRINT was awarded with various innovation and business awards and reached the break-even in 2014. In 2016, Dr. Volker Stadler was appointed to the Executive Board of the BioRN biotech cluster Rhine-Neckar. 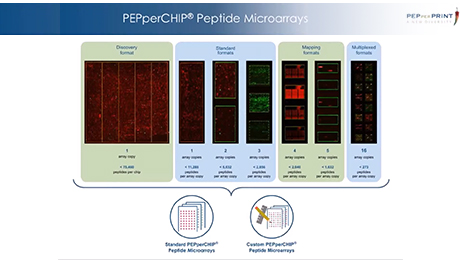